This is part 2 in a series of 7 articles showing you how to build a database-driven ASP.NET Core 5.0 app and deploy it to a remote web server using continuous integration and deployment with GitHub and Azure DevOps. In this part I'll show you how to set up the basic application, add a model that uses Entity Framework Core 5.0 to persist data to the database and how to create to the initial database.

Note: if you like to purchase the entire series now and not wait for the remaining parts to come online, check out this blog post that explains how you can purchase it for only $8.

If you haven't read the first part of this series you're encouraged to do that now. Here's the full list of the articles in the series:

The app I'll be creating for this article series will be super simple; all it does is show some data from a database on the home page. However, from a setup perspective, I'll try to use as many real-world concepts as possible. For example, I'll place the model and the EF persistence logic in different class libraries. From a separation of concerns point of view, that's a good idea, but it does introduce some challenges when automatically building and testing your application. I'll address these challenges in the remainder of this artice series.

The app I'll build in this and future article looks as follows: 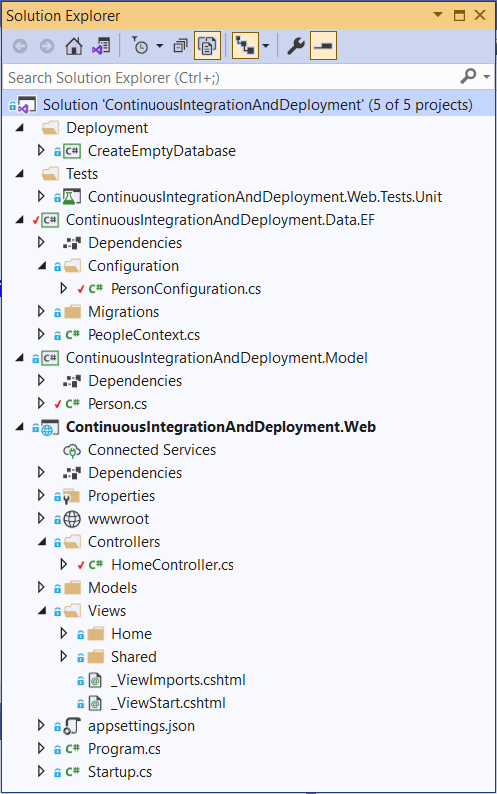 You can also find its full source on GitHub here: https://github.com/Imar/Articles.CICD

In the next sections, you'll see how to do the following:

Note: Since this article series focuses on CI/CD, the application doesn't have many features; the only thing it does is display some data from a database table using an Entity Framework DbContext.

In the following steps you see how to create a basic ASP.NET Core application.

In the next section I'll add new projects to host the model and Entity Framework code. Although I could add this directly to the main Web project, it's a best practice to separate those out in individual projects. This will make managing your solution a lot easier especially when your application grows. And even though this article series focuses on the build and CI/CD process, I want to make the demo project real enough to ensure I run into some challenges later as you'll run into them as well with your own projects.

Adding a Model and Entity Framework

Next you'll see how to add class libraries, packages and code for the application's model and Entity Framework functionality. I won't explain every step in detail so if you feel you're not sure how I did something, check out the code for this project in its GitHub repository.

Entity Framework has some really good default conventions to help build a database from your model. For example, with the Person class I showed earlier, you get a database definition that looks like this:

The table is named People (inferred from the DbSet in the DbContext), and Id is created as an int and set as the table's identity as a convention. Other columns, such as the first and last name, are inferred as optional strings with a very large maximum length. That's probably not what you want, so you can control that through code. I often see code examples where this is done directly in the DbContext, in the OnModelCreating method to be exact. Here's a quick example that would rename the table and make first and last name required and give them a maximum length:

Although this works fine, it becomes messy pretty quickly if you have a large model with many entities. EF Core has a nice way to separate out this logic to individual classes (one per entity) which you can then apply to the context dynamically. All you need to do is create a class that implements the IEntityTypeConfiguration<T> interface where T is your entity type and then add your configuration logic to the Configure method.

In my sample project I have a class called PersonConfiguration (I follow the convention EntityNameConfiguration for these classes) that looks as follows:

This code accomplishes the same: it makes first and last name required and sets the maximum column length to 50. (It doesn't rename the table as I am fine with the current People name, but I could just as easily have renamed it in the PersonConfiguration class like this:

To automatically apply all the configurations in the EF project, my DbContext has the following code:

This picks up all classes that implement IEntityTypeConfiguration<T> and calls their Configure method. If your configurations are located in another assembly or they are spread over multiple assemblies, you can specify that other assembly and/or call ApplyConfigurationsFromAssembly multiple times.

For now, this completes the model and persistence layer. I'll revisit this later in this article when creating the actual database.

Next up is consuming the EF DbContext in the web project.

Setting up the web project

For the web project to use the EF DbContext, a few things are needed:

In ASP.NET Core, you can add connection strings to your main appsettings.json file. as follows:

The sample application contains the above connection string to point to a local SQL Server instance called (localdb)\mssqllocaldb targeting a database called CICD.

Note: if you're new to the configuration system in ASP.NET Core, check out these links:

Add the PeopleContext to the DI framework

In an ASP.NET application you typically want a single insance of a DbContext per request. This way you can retrieve data from multiple places without the overhead of instantiating multiple contexts. The same is true for updates: by having a single instance throughout the request, you can make multiple updates to your data which would all be saved at once.

To make the DbContext available to your code, for example, in a Controller, follow these steps:

Using the context in the Web project

The next and final step is using the DbContext inside the web application as I'll show next.

Note: I am injecting a DbContext directly into a controller. This works fine in my case, since this is an article about CI/CD and not EF. In some of my applications, I am also fine doing this if the application is small enough. In many other cases though, I would create and use repositories instead. The repositories receive a DbContext in their constructor and save the instance in a private variable for further usage. The controller then accepts the appropriate repository instead of a DbContext directly.

If you try to run the application now, you're greeted with an exception. The reason for that error is that the database hasn't been created yet. I'll do that next.

Entity Framework comes with a Migrations feature that helps you manage change in your applications. Although I've had tons of problems with migrations in the past, it has gotten a lot better and is now in a state where I use it on more and more projects.

With migrations, you make changes to your application's model in Visual Studio and then use Add-Migration to create C# code with instructions to create database schema such as tables, columns and indexes. Then when the time comes to update the database, you run Update-Database which then executes the migration code and creates the initial database or updates an existing one. Since the Migration commands can be run at a command-line, you can also execute them during the build and release pipelines which means you can generate scripts and deploy them to your remote sites everytime a new build is released. You see how this works in parts 4, 5 and 6 of this series. For now, I'll show you how to run this locally to create a database on your development machine.

As I warned you before, the app isn't very exciting as all it does is display some columns from a database table. However, it lays a nice foundation to demonstrate setting up Git and CI/CD pipelines as you'll see in the next articles in this series.

Wonder where to go next? You can read existing comments below or you can post a comment yourself on this article.