Note: this is part three in a series of ten. If you rather read this entire series off-line, you can buy the full series as a convenient PDF document that comes with the full source. Besides the convenience, buying the PDF will also make you feel good as it shows your appreciation for the articles and helps me pay the bills for my server and hosting so I can keep running imar.spaanjaars.com and continue to provide you with great content. For more details, check out this post that shows you how you can buy the entire series right now.

This is Part 3 in a series of 10 that show you how to build N-Layered applications using ASP.NET 4.5 and Entity Framework 5 Code First. In this part you’ll see how to make your solution unit testable. In addition, you’ll see how to setup a project for Integration tests which work similar to unit tests but that target the database directly.

If you haven’t read the earlier parts in this series yet, you’re encouraged to do so first. The following list has links to all articles in this series:

Note: as mentioned in Part 1, this article (and the previous) will contain a lot of hands-on, step by step instructions that show you how to setup a solution like the Spaanjaars.ContactManager application. You can use these instructions pretty much as-is for your own applications. The remaining parts in the series analyze the working code for the Spaanjaars.ContactManager application. I’ll show a lot of the code in detail, and explain how it works, but you won’t find detailed step by step instructions on how to add the code and files to the various projects.

To ensure a better quality of your software, it’s highly recommended to add unit tests to your projects. This way, you can test your code during development, minimizing the chance of introducing issues and finding and fixing them before they ever make it into production code. This article does not explain the need for unit testing in detail nor does it explain how to write good unit tests. For a good introduction into unit testing, check out the following references:

This article does, however, show you how to differentiate your types of tests (using different Test Projects in Visual Studio) and how to configure the solution so that the test projects can see the relevant assemblies in the solution. In many previous solutions I built, I use more than one test project, described in the following table:


In the next steps you’ll see how to add these four Test Projects to the solution. I am showing you how to add all four; one for each frontend application added to the solution in the previous article. If, however, your solution has fewer frontend implementations, only add the test projects for your particular frontend(s).

In order to better organize my solution, I prefer to group all my test projects in a Solution Folder called Tests. This is not required, but it makes it easier to get access to all your test projects at once, or hide them when you’re working on the actual code for the project. 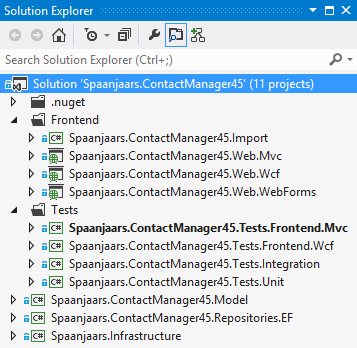 On disk your Solution should look like this in File Explorer: 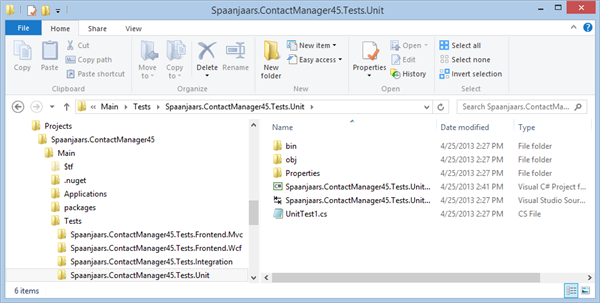 In the next section you’ll see how to add a simple test to three of the four Unit Test projects in order to ensure your projects, including the Infrastructure, Model and Repositories.EF projects as well as the Unit Test projects itself, have been set up correctly. In order for this to work, I’ll also add a few classes to the core projects with some temporary implementation. That code will be expanded or replaced in later articles.

Note: this is a pretty useless test. You should have other tests that implicitly check whether you can instantiate a new PeopleRepository class and then work with that instance. However, for now this test is useful to make sure that the Integration project has the correct references to the Repositories.EF project.

For now, these tests are really simple and only serve to verify the setup and relationships between the various projects. I skipped the tests for the WCF service as the current project doesn’t have any code files and adding a WCF service requires more background which I’ll cover in Part 8 of this series.

I’ll be adding more tests to the test projects as I progress through this article series. I won’t show you the code for all of the tests though; I’ll only highlight some of the more important ones. You’re encouraged to check out the source code that comes with this article series to see all the tests.

There are a number of open source frameworks available that make unit tests easier to read and more obvious. One of those frameworks is FluentAssertions created by Dennis Doomen. This framework allows you write the assertions for your test in a fluent way. E.g. rather than writing something like this:

Although you may need to get used to this new syntax at first, I generally find it more intuitive to read. It’s very useful to quickly see what your tests do but more importantly, non-technical people involved in a project can now more or less read unit tests too. This enables them to help you write the proper tests.

Under the hood, the various FluentAssertions methods check your values and raise exceptions when a condition is not met. This exception is eventually caught by MS test or another test framework you may be using.

In order to change your test projects to use FluentAssertions, follow these steps:

In this article you saw how to add a number of different unit test projects to your solution and how to set them up. While you could technically add all your tests to a single unit test project, I prefer to create separate projects for different types of tests. This allows me to decide when to run which tests. For example, because Integration tests generally run slower than plain unit tests (because they access databases and other slow resources), I could decide to run my unit tests after each build while the integration tests are only run when I check in code into TFS.

At this point, each test project contains a simple unit test that is used purely to check if the test projects were setup correctly. In later parts in this article series you’ll see how to add more useful tests to the different test projects.

With all the “plumbing” done, the next step is to start building the model. In the next part in this article series you’ll see how to set up the model using POCO – Plain Old CLR Objects - classes. That model is then used in Part 5 that describes how to build a repository that targets Entity Framework 5 Code First to interact with the database. In the articles following Part 5 I’ll show you how to use the model and the repositories to build various frontend applications.