As a software designer and web developer I usually focus on the back end of web sites and applications and leave the User Interface and UX design to people more knowledgeable. Still, occasionally I have the need to do some sketching and drawing with a customer, for example when designing a web interface or when working on use case documents. While paper and pencil often work fine, they lack durability. Additionally, the result is hard to share, especially with "digital" clients or clients in a different country. Over the years, I've been working with a number of software design tools to aid me in this process. Since I get asked which tools I use every now and then, I decided to write a short blog series outlining a number of these tools, including Balsamiq Mockups, Axure RP Pro, Microsoft Visio with the 'GUUUI Sketchy GUI Shapes' stencil, Pencil, and Microsoft's Sketchflow.

In this series I'll be (re)creating a design mockup for the Management section of my web site with each of the tools, giving you the opportunity to compare their output. You'll find a screen shot of the existing Management section at the end of this article.

Microsoft Office Visio 2010 is part of the Microsoft Office 2010 suite, although it can be purchased and used separately. It's an advanced diagramming tool that enables you to create a wide range of diagrams, including (but certainly not limited to):

Microsoft Office Visio has been part of the Office suite for quite some time. However when Office 2007 was released, Visio didn't get the new Ribbon bar interface. That has now been corrected in the 2010 release, giving Microsoft Office Visio 2010 the familiar Office look, shown in Figure 1 (click for a larger version). 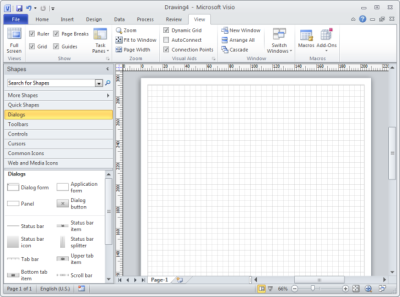 Because it looks so much like other Office applications, it's pretty easy to get started with Visio. To help you jump start you diagram, you can choose among tens of different diagram templates when you create a new document. The options you choose here mostly determine the different kind of stencils - a collection of controls and other UI elements that are specific to the diagramming type- that are loaded by default. Once you've chosen a diagram type, you can load stencils from other types by clicking More Shapes shown in Figure 1. This pops up a menu that lets you choose from preloaded shapes and gives you an option to load new ones. Below the More Shapes item you see a number of other stencils that are loaded with the Wireframe diagram including the open Dialogs stencil that shows a number of dialog related shapes.

Although Microsoft Office Visio 2010 ships with a large amount of features, there are a few things missing. The Wireframe Diagram is designed to create "medium-fidelity diagrams for software application prototyping and design. Being "medium", it lacks the high detail that Axure gives you and at the same time doesn't give you that sketchy look that Balsamiq has. Fortunately, Henrik Olsen from www.guuui.com has created a Visio stencil with sketchy shapes, and some interesting scrolling behavior that Visio does not have by default. You can find the shapes and a detailed article about using them from the article Visio - the interaction designer's nail gun (3rd edition). Once you have the stencils installed you get a stencil looking like this (click for a larger version): 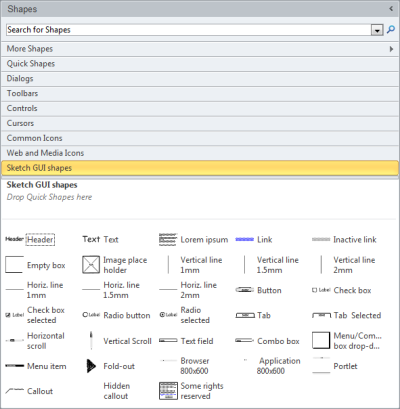 These shapes in turn enable you to create diagrams that look like they are hand drawn. For example, in Figure 3 you see a part of the final screen with the main tabs:

Although Visio has a lot of power, I didn't find it very easy to create the final diagram shown in Figure 5. Part of that is caused by the Sketchy GUI Shapes that make working with the shapes on the design surface pretty difficult. Especially when items are grouped or very close to each other, they are very hard to select. I sometimes needed 17 clicks to select something which normally takes only a single click. Clearly, that's pretty frustrating, so I think Microsoft Visio with the Sketchy GUI Shapes is this week's number one in the list of "tools that made me swear and curse and smash my keyboard". I think the problem is being caused by the Sketchy GUI Shapes as I never had problems like this when working with Visio in other types of diagrams or stencils.

Another issue I found with Visio is the limited set of available shapes and their behavior. For example, Visio has a Tree control (used to create the left navigation in Figure 5) but it takes forever to create as you need to add each item manually. Once it's added, it takes another step to indent it at the right level and yet another to change the plus icon to a minus icon. You also can't modify the icons yourself. I really miss the behavior of the Tree or List controls from Balsamiq that let you create a list or tree-like structure in seconds and even enable you to copy and paste elements from a text source. I would trade the Visio tree for the one from Balsamiq any time!

Fortunately, Visio has a lot of strengths as well. Here's a quick list of the stuff I like about the program from the perspective of a Wireframe designer:

Things to Wish For

Which each of the tools I am reviewing, I am creating a mockup of the page in the Administration section of my web site that enables me to manage content categories. The page looks like this (click the image to get a bigger version): 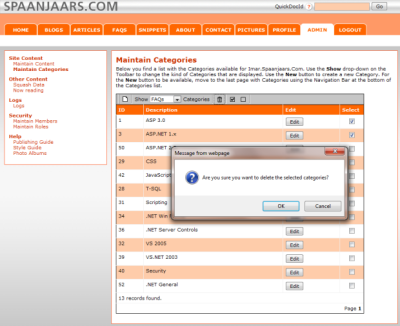 Figure 4 - The Management Section of Imar.Spaanjaars.Com

Using Microsoft Office Visio 2010, I ended up with the follow mockup (click the image to get a bigger version): 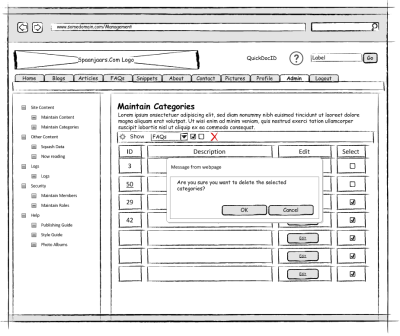 In addition to a static screen shot, you can also try out a live version of the Prototype here. On the first page you see the site map. You can click on the blue Manage Categories item to display the management section with the categories. Clicking on the Delete button on the toolbar pops up the alert box shown in Figure 5. Clicking OK or Cancel then takes you back tot the categories list.

There are a lot of compelling features in Microsoft Office Visio 2010 that make it an excellent and versatile diagramming tool. However, I don't think I would recommend it for wireframe diagramming alone. Considering the price for Visio, you can get better tools for your money (Axure or Balsamiq, for example, depending on your budget and requirements). However, if you already have Visio or intend to use many of the other diagrams as well, it's worth considering. It creates reasonable wireframes and is pretty easy to use (if you don't use the Sketchy GUI Shapes). Although I like the looks of the GUUUI Sketchy GUI Shapes a lot, they are somehow really difficult to work with. For quick drawing they are great, but I got pretty frustrated when using them for some time. I am not sure what exactly is causing the problem, or how to work around it.


Links in this Document