UPDATE: Links to the MVC site on the URL mvc.spaanjaars.com are no longer active, now that the site is live at imar.spaanjaars.com.

I just uploaded a new version of my web site in MVC to mvc.spaanjaars.com. This new version has the following features:

Some of the main USPs of the MVC framework are separation of concerns and testability. So when rebuilding my web site in MVC, I kept these principles in mind. One area where that is really useful is in the data access part of the application. Rather than tying my controllers to the database or data access layer directly, I am injecting interfaces for data access into my controllers at run time. These interfaces in turn provide access to repository interfaces. I then have a bunch of concrete classes that provide real data at run-time, and test data during testing. I'll show you some of the code for the repositories first, followed by a discussion on using Castle Windsor for the dependency injection. The second half of the article shows you how to use extension methods to create behavior that is shared between real and fake implementations of your repository classes.

NOTE: at the end of the article you can download a full, working example of the concepts presented in this article. You should realize that the sample application is just that: a sample. In a real-world application you need a lot more than what is presented in this article. Additionally, the code does not necessarily show best practices for MVC applications as it's focus is on an implementation of the Repository pattern using extension methods. The database for the sample application contains a bunch of fake categories and articles. If they don't look like true categories and content articles you may find on a web site like mine, but think they look more like products: that's because I generated the records automatically using Red Gate's Data Generator as explained here. Also note: the application is using MVC 2 and Entity Framework 4; as such you need Visual Studio 2010 to compile and run it. You probably could downgrade the code and recreate the model in VS 2008, but I haven't tried that yet.

You can then use this interface for a concrete implementation on, say, a Product like this:

This works excellent, and enables you to do something like this in your code:

What I personally find difficult about this "repository per aggregate root" concept is the fact that in your application, things are not always as disconnected as each aggregate root seems to indicate. Sometimes you do need a Customer from the CustomerRepository and associate it with an Order from an OrderRepository. This isn't a big deal when dealing with, say, test data in fake repositories or when working with your own data access classes, but it does become problematic with Entity Framework or other ORM frameworks that need to keep track of these entities from the same underlying mechanism. If you try to associate an entity from one EF context with another entity from another context you get an error such as the following:

So you need to find a way to share the ObjectContext from EF and still separate your aggregate roots. To solve this problem for the MVC version of my web site, I am using an IRepositoryWrapper interface whose concrete implementations can hold an instance of a single ObjectContext and provides access to a number of Repositories that get a reference to this ObjectContext. To show you how this works, I created a simple web application using ASP.NET MVC. The application is an extremely simple web site that shows articles in specific categories. Figure 1 shows the database model for the application.

First, take a look at a part of the (simplified) class diagram of my application, shown in Figure 2. 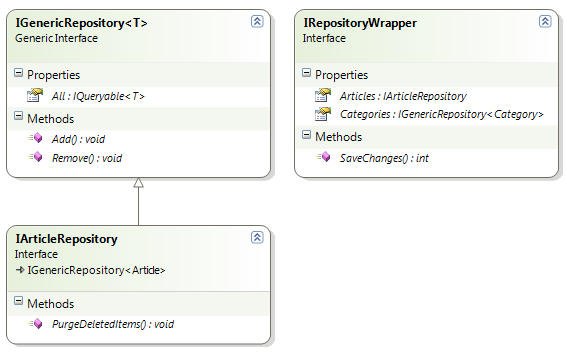 I'll get to the IRepositoryWrapper later, but for now focus on the two interfaces on the left. IGenericRepository<T> is a variation of the interface you saw earlier and defines the base services a concrete implementation needs to supply: All, Add and Remove. For simple aggregate roots, like Category, this is more than enough. As an example, I also added IArticleRepository that inherits IGenericRepository<Article> and adds one extra method: PurgeDeletedItems that deletes items marked for deletion from the database. This just serves as an example. You could, and probably should, implement PurgeDeletedItems as an extension method as explained later in this article.

Inside my Model class library, there are two concrete repositories: ArticleRepository and CategoryRepository: You can see that each of these concrete classes implements the members defined by the interfaces they inherit. Additionally, you can see they have a field called _entities which is of type MvcDemoEntities, the Entity Framework ObjectContext instance used in my application. The concrete implementation uses these entities for data access. For example, Remove in the ArticleRepository looks like this:

The concrete repositories don't create this instance themselves; instead, they get a reference to the ObjectContext passed to them in their constructor like this:

The two properties are lazy loaded and instantiate a repository when requested and pass it the _entities ObjectContext. This in turn means the repositories all share the same ObjectContext enabling you to share entities across repositories. With this setup, you can now do stuff like this in a Controller method:

This is all fine, but doesn't really promote testability of your repositories. Also, since the Controller is instantiating the RepositoryWrapper directly, it's not easy to swap the RepositoryWrapper for another implementation. Finally, it's now pretty difficult to test your Controllers as they are tied to the concrete RepositoryWrapper that in turn uses the Entity Framework and a live database for all data access. Fortunately, the code I've shown you lays out a nice foundation to improve on, using Castle Windsor, a few Fake classes and a whole bunch of extensions methods.

While this seems like a lot of work, it opens up a number of interesting possibilities. For example, you can now test your Controllers by doing the following:

At this point you may be thinking: "Now wait a minute; isn't he just testing his fakes, and not his real repositories?" Yes, to some extent you would be right. For example, imagine my IGenericRepository<T> had a member called GetById(int id) that was implemented in the real and fake repositories as follows (note the faulty implementation of GetById in the real implementation):

If this was real code, and I was testing against my FakeArticleRepository, I would never catch this bug. The Fake would return the correct article, but at run-time I would receive the first article with an ID higher than the one requested. To prevent these kind of issues where there is a mismatch between your fake and real implementations, I haven't added members like GetById or GetByCategoryId to the interfaces and real implementations. Instead, I have created a bunch of extension methods on the respective repository interfaces that do all the repository logic such as querying for me. Because both the real and the fake repositories implement this interface, they get access to these extension methods which in turn means they exhibit the exact same behavior when run. I pretty much dumbed down the repository interfaces to "a bunch of objects of type T" with the All property and let the extension methods do the hard work. I can trust a property such as All to be reliable across both implementations as it requires little to no code. But when it comes to querying or other logic, an error is easily made in one of the two concrete providers, so it's good to move te logic to a shared location that multiple concrete implementations can use. To see what I mean, consider these two methods in an Extensions class:

GetActive makes sure I am not returning items that have been marked as deleted. GetById in turn uses GetActive to get all non-deleted items and then queries the one with the ID requested. With the real implementation using EF, I get a composable query that executes a simple and clean SQL statement against the database. With the Fake implementation, I get the same, but instead of targeting a (slow) database, I query the in-memory representation of my fake list of articles. Either way, I am testing the implementation of GetById, without needing a real database at test time. This makes it pretty easy to test your repositories and your Controllers using fake objects and fake data, while still being able to true test runtime code.

Pfffeew, I covered a lot in a relatively short article. Let's briefly recap the main topics:

I haven't covered each and every piece of code necessary to make these concepts work. However, the download that comes with this article has a fully working, and testable application that shows all major concepts. I haven't written a test for each possible scenario, but instead wrote just a few tests to demonstrate the main concepts.

Since this is a work in progress, I am looking forward to a discussion on this topic. Let me know what you think of this using the Comment feature at the end of this article.